ORLANDO, Fla. (AP) — It takes a lot of land to accommodate Cinderella’s castle, The Wizarding World of Harry Potter and Epcot’s 11-country World Showcase — and a hefty purse to pay the property taxes on it.

To cut tax bills in the tens of millions of dollars, the specialists at Orlando’s famous theme parks have employed methods from the creative — placing cows on undeveloped land and claiming an agricultural exemption — to the traditional — negotiating or appealing to a county board.

Over the past couple of years, however, such tactics aren’t quite doing the job: Property assessments and taxes have jumped — and so has the number of lawsuits the theme parks and other businesses have filed against Orange County’s property appraiser. That’s Rick Singh, who was re-elected to a second four-year term last fall despite the thousands of dollars in donations park officials gave his opponent. 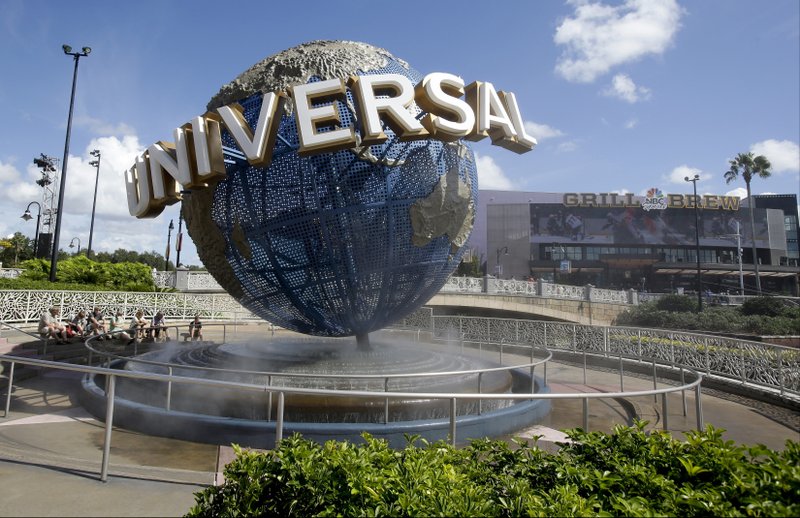 In this Thursday, Oct. 22, 2015 file photo, park guests relax and cool off with a water mist under the globe at Universal Studios City Walk in Orlando, Fla. Orlando’s top tourist destinations, Walt Disney World, Universal Orlando, SeaWorld and several resorts are in legal battles about how much they’re worth with the local property appraiser and tax collector. (AP Photo/John Raoux)

In lawsuits filed last year, the theme parks said Singh’s office had failed to use proper appraisal methodology. Walt Disney Parks and Resorts issued a statement describing increased assessments on some of its properties for 2015 as “unreasonable and unjustified.”

Beyond such terse statements, officials from Disney, the development arm of Universal Orlando and SeaWorld of Florida are saying very little about an issue they hope to resolve in court.

But they have spoken loudly with their wallets. Groups affiliated with all three companies gave $19,000 to Singh’s Republican opponent. Singh, a Democrat, got only $5,000 from the groups.

“If the single mother who is working two jobs has to be held accountable to pay her fair share, so should everybody else.” – Rick Singh, Orange County property appraiser

The backlash isn’t surprising, said Doug Head, chairman of the watchdog group Orange County Watch. Head said the appraiser’s position has traditionally been a cushy post for local politicos waiting to retire, but Singh is one of the first to have substantial professional training.

“He uses professional expertise, and he clearly figured out there is a lot more value than is properly being reflected,” Head said. “He did what he needed to do, and people accustomed to the way business was done weren’t happy.”

Singh said his methods for assessing properties are no different than those of his predecessors — except when looking at resorts and hotels. Then, he considers their income statements and the local “bed tax” paid by hotel customers, which he said his predecessor didn’t use. Income isn’t considered when assessing theme parks.

“It’s a matter of being fair and equitable,” Singh said. “If the single mother who is working two jobs has to be held accountable to pay her fair share, so should everybody else.”

The importance of the three theme parks to Orange County, which includes Orlando, can’t be overstated: The properties owned by Disney, Universal and SeaWorld are valued collectively at about $10.7 billion. Properties owned by the largest resort and timeshare companies are worth another $6.3 billion.

The three theme park companies pay 7 percent of the county’s property taxes — more than $135 million last year. That revenue helps to mitigate the impact of hosting 66 million visitors in 86,000 hotel rooms and 15,500 timeshare units every year, and to finance law enforcement, schools, parks and public health programs. Disney also pays property taxes to a private government established by the Florida Legislature that provides the Disney parks and resorts with services including utilities, roadways and firefighters. 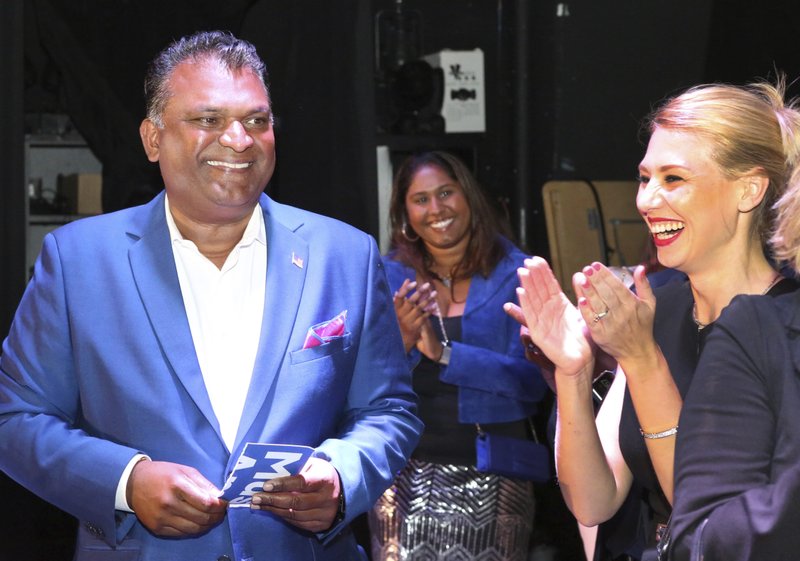 This Nov. 8, 2016 file photo shows Orange County Property Appraiser Rick Singh, left, at an election party in Orlando, Fla., after he was re-elected to a second four-year term despite the thousands of dollars in donations theme park officials gave to his opponent. In lawsuits filed last year, the theme parks claimed that Singh’s office had failed to use proper appraisal methodology. (AP Photo via Orlando Sentinel/Red Huber)

Property values for the theme parks, resorts and other large commercial properties are set by a team of almost two dozen of the county’s seasoned appraisers in what Singh calls “the most complex tax roll in the world” due to the constant growth.

Singh said the appraisers use a “cost approach” when evaluating theme parks. Tax bills go up not just from rising property values but also from new construction, which is constant at the parks.

But the results are meeting a wall of resistance. Last year, Disney, Universal and SeaWorld filed a dozen lawsuits against Singh’s office, the tax collector and the state Department of Revenue. Several other Orlando resorts also have sued.

The companies pay taxes only on their properties’ “assessed” values; the “market” values reflect what the properties could be sold for.

SeaWorld is fighting the market and assessed values of its flagship SeaWorld Adventure Park, its Aquatica water park and Discovery Cove, an animal-encounter park. In a separate lawsuit the property appraiser’s office filed against SeaWorld in 2015, Singh’s office listed a market value of $192.5 million; SeaWorld listed it at $143.4 million. 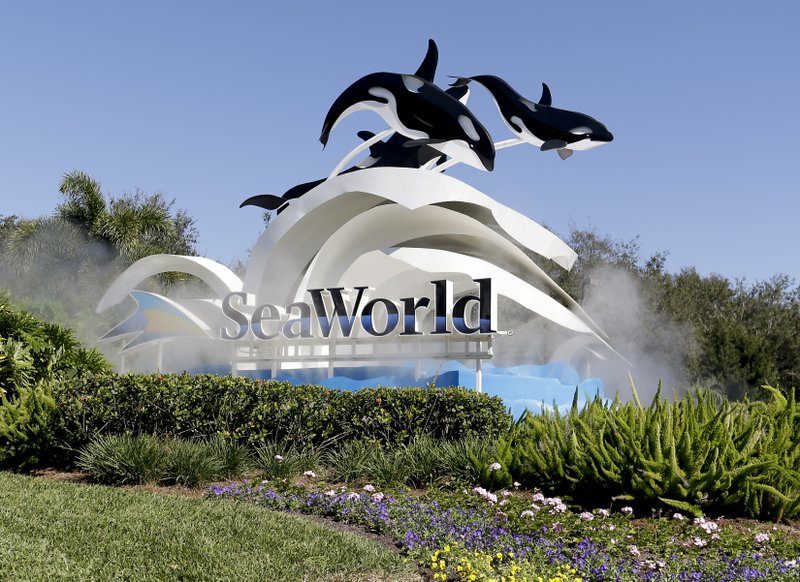 In this Tuesday, Jan. 31, 2017 photo, the entrance to Sea World is seen, in Orlando, Fla. Orlando’s top tourist destinations, Walt Disney World, Universal Orlando, SeaWorld and several resorts are in legal battles about how much they’re worth with the local property appraiser and tax collector. (AP Photo/John Raoux)

Disney is disputing the assessments of properties including four theme parks, 11 resorts and two water parks. An Associated Press tally of all the properties listed in the lawsuit shows that the appraiser gave them a total market value of more than $5 billion in 2015.

Disney, whose total properties in Orange County have a market value of $8.2 billion, is not saying publicly what it thinks the value should be. But the company’s tax bill from Singh’s office jumped from $84.5 million in 2014 to $97.2 million in 2015 to $102.6 million in 2016, an average increase of about 10 percent a year. Those numbers exclude what Disney pays its private government in property taxes.

“Similar to other property owners in Orange County, we have no choice but to take action to dispute these errors by the property appraiser,” Disney’s statement said.

For ADA assistance, please email compliance@placester.com. If you experience difficulty in accessing any part of this website, email us, and we will work with you to provide the information you seek through an alternate communication method.
DANIEL WILSON | REALTOR®