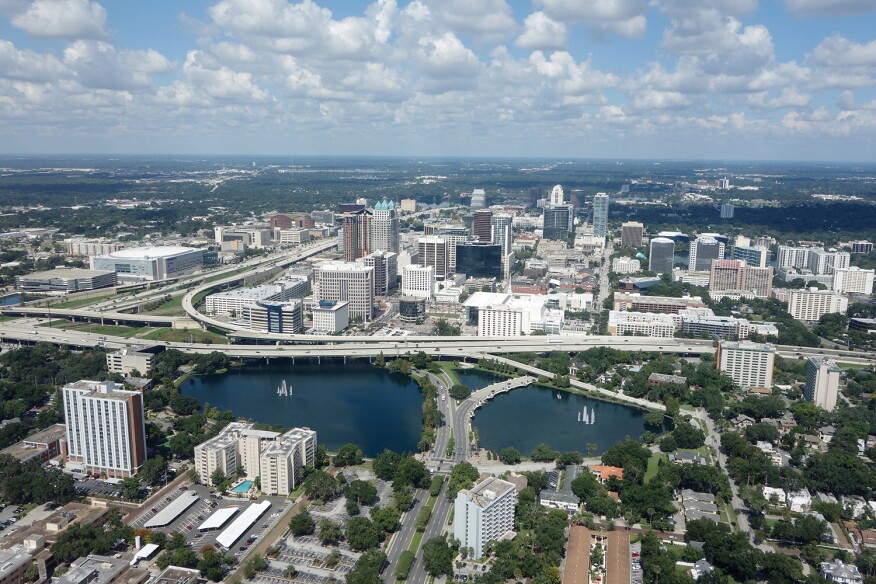 Nearly 2.4 million people call the Orlando metro area home, but most visitors never get past their hotels to see why—a fact that city officials and architects hope to change.

For the majority of the 66 million people who visit Orlando each year, “downtown” means the fairy-tale castle at the heart of Walt Disney World’s Magic Kingdom, and “walkable” refers to the distance between the Haunted Mansion and the Seven Dwarfs Mine Train. Tourists dazzled by famous and flashy theme parks can be forgiven for not realizing that the city of Orlando has a real downtown and an urban identity all its own, one crafted not by Disney Imagineers but by planners, developers, and architects.

Located in central Florida, about an hour west of the Atlantic coast, Orlando is the third-largest metropolitan area in the state. The population within its city limits is about 270,000, but when you factor in the larger metropolitan area (which includes Winter Park, Maitland, Kissimmee, Altamonte Springs, and dozens of other municipalities and unincorporated communities) the population balloons to nearly 2.4 million. When Walt Disney announced plans to move his company’s newest theme park to the area in the mid-1960s, the city had already been a century-old resort town. Once the park opened in 1971, however, Orlando became a boomtown.

But it’s been a sprawling boomtown. With Disney World, SeaWorld, and Universal Studios situated to the southwest of the historic core, and the airport to the southeast (not to mention a seemingly endless number of shimmering lakes), Orlando has grown in nearly every direction—as much a product of the vacation industry as topographical challenges. Cars are a necessity in central Florida, and as a result Orlando was named the nation’s least pedestrian-friendly city by the National Complete Streets Coalition, which advocates shared multimodal roadways.

On one hand, pedestrians (or cyclists, for that matter) are certainly challenged to get around Orlando. But on the other hand, Orlando is obviously a different kind of place than New York, San Francisco, or Boston—all empirically walkable and all founded in the 17th and 18th centuries. The question is less about holding Orlando to an unreasonable standard of placemaking, and more about how the city can carve out a sustainable future—even in spite of its walkability score.

In the last 10 years there has been a considerable effort to change the city in ways that might surprise people who have written off Orlando as merely a tourist trap. On April 27 to 29, the AIA will bring its Conference on Architecture to Orlando and provide the city with a chance to show off its architectural gems, revitalized historic areas, and New Urbanist neighborhoods.

“Millions of people come to the airport, they go straight to the hotel, and they don’t actually ever see Orlando proper,” says AIA Orlando president Holly Stenger, AIA. “Yet this is an amazing city, with a skyline, new professional sports facilities, a new performing arts center, and a recently renovated football arena. Our downtown is very urban, with quite a decent residential population. It’s a really great outdoor lifestyle city, too.”

The groundwork for Orlando’s urban success today may lie in a forward-thinking ordinance put in place 25 years ago that promoted mixed-use infill development. Under the leadership of Mayor Buddy Dyer, who took office in 2003, the city has also sought to create partnerships among the many neighboring municipalities to spur investment and development not only downtown but in the region as a whole.

Since it opened in 2014, the Dr. Phillips Center for the Performing Arts has become a cultural anchor downtown. It cost more than $500 million, two-thirds of which came from public funds.

“Within the last 10 years, we’ve added some 18,000 people into our immediate downtown,” says Jason Burton, Orlando’s chief city planner. “We have the brand-new performing arts center, we may have the finest arena in the country, and we opened a soccer stadium last month.”

The Dr. Phillips Center for the Performing Arts, designed by Barton Myers, FAIA, with HKS and Baker Barrios Architects, opened in 2014 and features a broad glass façade and swooping roofline. Already it has become a popular destination for touring Broadway shows. Orlando City Stadium, the brand-new soccer venue designed by Populous, is located only a few blocks west. Both are in the heart of downtown, near apartments, hotels, restaurants, and libraries.

Two years ago the city developed a visioning process called Project DTO (for “Downtown Orlando”) that is meant to guide development in the coming years. Guiding principles for the plan include highly connected neighborhoods and districts, a creator culture, diversity and inclusiveness, an iconic visual identity (sure to make architects cheer), and more. Already, the effects of this work are beginning to be felt.

Although the big institutional landmarks are important, it’s down on the human level— on the sidewalk, in the street, and in the bike lanes—where Orlando officials are noticing an increased urban sensibility, too. Compared to other Florida cities that are geared more toward retirees, Orlando has a youthful vibe, with many clubs, bars, and cafés. Burton says that at times there is more foot traffic on the sidewalk at midnight than there is during the day. (One of those clubs, Pulse, was the site of a mass shooting last year, and the city continues to honor the victims of that tragedy in various ways, including a section of rainbow-colored seats in the new soccer stadium.) Burton says that he hopes Orlando will eventually land on a “walkable city” list.

Neighborhood reinvestment has come in the form of historic preservation initiatives, the Orlando Main Street Program (the city has 10 so-called “Main Street Districts”), and New Urbanist Development. One of these projects, Baldwin Park, for instance, is situated on Lake Baldwin, just 2 miles from the urban core. Opened 15 years ago, the development took more than 1,000 acres of an abandoned military training installation and converted it into a mixed-use, walkable neighborhood that is better connected to the city around it than earlier New Urbanist experiments, such as Celebration, Disney’s famed master-planned community located in the same metro area. 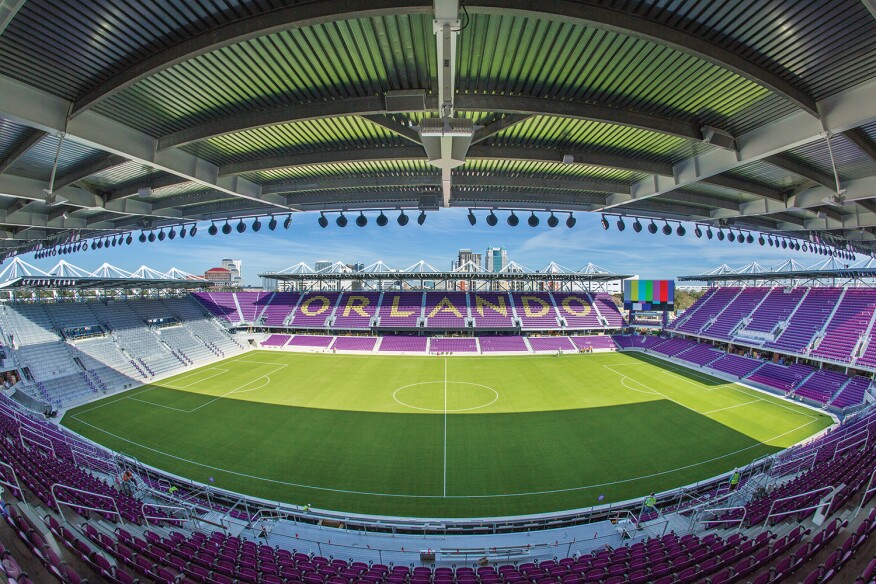 Fulvio Romano, a partner with the local firm of Rabits & Romano Architecture, serves on the city’s Appearance Review Board. He says that the board is tasked with not just encouraging good architecture, but with establishing good connections between new buildings and distinctive existing ones, and integrating the new ones into the character of their neighborhoods. His own firm recently completed a residential project called the Brownstones at Thornton Park. “The front door is on the sidewalk. It’s connected to the park and walking distance to great things,” Romano says.

One thing Romano would still like to see happen is some kind of public transit between the theme park areas and the downtown. “That would really bring things together, so people could see the real Orlando,” he says.

Still, he says, it’s a good time to be an architect in Orlando. “I feel like we are helping shape the face of downtown,” he says. “We’ve had a lot of new buildings, all sizes, and the mayor is trying to get people to invest in downtown, and I think it’s paying off. Every day you see more activity.”

“Orlando is a good location for a firm because it is centrally located and you can easily get to other parts of the state,” AIA Orlando’s Stenger says. “We hope that after the conference we can continue that momentum and keep architecture in the minds of the community—and not just the buildings, but the urban design around it. We are planting the seeds, and we hope we can continue to grow that awareness.”